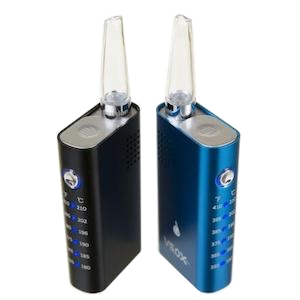 The V5.0X Mini is the little brother of the Flowermate V5.0X. Powered by a 1800mAh battery, the V5.0X Mini preserves similar features of its predecessor but heats up slightly faster. Moreover, it can also be used as a power bank and charge your phone for example. There's always something to love about Flowermate!

Big things can come in small packages, that’s how it is with the Flowermate V5.0X Mini, one of the smallest dual-use vaporizers ever produced by Flowermate. It’s a bit more advanced than some of its counterparts in the Flowermate lineup, and it’s made it entirely adaptable for its wide range of accessories.

Mini is the X Factor
The V5.0X Mini is the smaller version of the popular V5.0X vaporizers from Flowermate. Recently, Flowermate has made a point to create smaller versions of their more popular vaporizers like the V5.0S Pro. There is nothing unusually large about these products in the first place, but mini’s are stealthier, less expensive options. Don’t worry though. They still have all the great features of their larger brothers. The Mini X, for example, includes pre-packing tanks to keep you vaping on the go. If you leave with a full chamber, you can always pack a pre-loaded tank to extend your fun. Even with a shorter draw stem, the glass mouthpiece does a great job of keeping your vapor cool and flavorful.

Smaller, Better, Faster
Everything about the Mini X is meant to be swift and easy. The operation of this device is as simple as any common appliance and is an excellent choice for those who are just now picking up vaporizing. It heats in less than 30 seconds, utilizes a fully ceramic heating chamber and has a 6-minute shutoff timer to keep users from forgetting to turn it off or to time a session.

Power Bank function
The unique feature of the V5.0X Mini is that it can operate as an on-the-go power bank for any of the other electronics that you bring with you. Using the power of the included 1800mAh lithium-ion battery, your Mini X becomes your best friend either on the subway or out in the woods somewhere. The battery can last for up to 1.5 hours of use on its own, so for a normal day, this will get you as far as you need to go.

Pick a Preset
The main advantage of the Mini X over its less expensive cousin the V5.0S Pro Mini is the added temperature control. The range of temperatures is more than enough to vaporize both herbs and concentrates without risking combustion and accessible using the single button interface that Flowermate has perfected over the years. The range consists of these six temperatures:

Check out a short video of the Flowermate V5.0X Mini from unboxing where you may also see all the accessories included and the highlight of the vaporizer’s feature.

What’s in the Box?

In a world where it seems like everything electronic is ballooning in size and cost, the Flowermate V5.0X Mini is a breath of fresh air. If you’re the type to carry your vaporizer with you all day, the power bank makes the Mini X a no-brainer. For someone who spends a long time away from the house, it’s a perfect complement to a home unit. Although considering the solid construction of the Mini X, this could also be used as your main vaporizer with no issues.